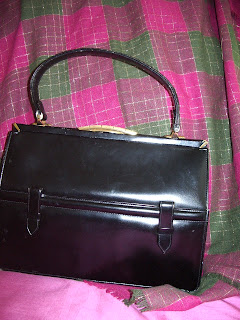 Last night, my husband and I went to see this film which we have wanted to see for a while. Somehow over the holiday and through the surgery period we just could not make time to go to a theatre where it was playing. Living in the suburbs gives me a large house and garden but sometimes keeps us away from more urban pursuits. Fortunately, we live fairly close to a second run theatre that is housed in that suburban scourge, the shopping mall and last night was Toonie Tuesday so the frugal me was happy (unfortunately the seats are not as comfortable as the multiplex cinemas and the people that were in the theatre talked!). If you love vintage, especially early 1960's, you will not be disappointed by this film. The handbag I have pictured here is from the late fifties or maybe the early sixties and fits right in with the style of the film.

The charming young actress Carey Mulligan plays the lead as a young school girl destined for Oxford but questioning the reason for such educational ambitions. It could be said that this story, it is based on the memoir of journalist Lynn Barber, puts the finger right on that point when young women started to think about careers beyond being a teacher, nurse, secretary, and, of course, wife and mother. The society in general was supportive of the idea but was as ambiguous about putting it into practise as it might still be. Having the right kind of education was seen as the goal for the parents of the film's protagonist which would not have been unusual for many couples whose children where born near the end of the war. They knew what label to put on it, they maybe just did not know quite why. 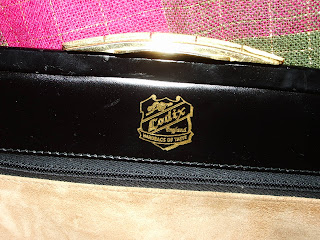 The handbag is labelled Lodix England -Handbags of Taste. The only online information I have located is other vintage handbags for sale and nothing about the company that made them. I find this particularly sad as it means we are losing our society's identity as manufacturers and becoming one of sales people and consumers. The label says "Handbags of Taste" which it certainly is and when it was originally purchased it no doubt was intended to last (which it has) and bought for its quality. Interestingly, unlike today, the label is on the inside whereas today the labels are emblazoned on the outside for everyone to see.

The young Miss Mulligan has been called: "the new Audrey Hepburn". As an huge fan of Miss Hepburn, I find this kind of label unfortunate as it would be impossibly overwhelming to try and live up to and negates the talent and charm of this newcomer as well as that of the original. The clothing style of the film, her slim figure and on-screen presence do suggest similarities but I think that this is not a comparison any young actress of integrity would welcome. Just as Audrey knew, I hope that Carey knows that it is what is inside that counts not the outer shell that we see at first glance. 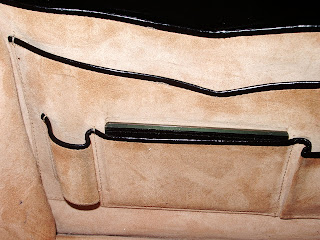 For me, what I really love about the handbag is the design and quality of the inside of the bag. It allows me to carry almost all that I need when I am out of the house with the exception of indoor shoes and a book or magazine. The pockets are useful and orderly, the original mirror is still in its pocket, the suede is of beautiful quality and has been well cared for. From the few other bags by the same make available online, I believe that it is missing a coin purse but that does not detract from my appreciation of this vintage handbag.
Posted by Jenifir at 10:10 AM

a wonderful post on some of the aspects of the early 60s. Love the handbag...these bags were made to last many years of use and were both beautiful and functional. Wish I still had mine from that era.

I too have been searching for information on Lodix. i have 2 beautiful Lodix handbags which have withstood the test of time and would love to know more about the brand.

Lodix was a company run by by my grandparents in Leeds UK. They made wonderful handbags and the reason that they are so well made my grandmother designed them, therefore they had a place for everything and always matching purses and a mirror(some had secret pockets too)They retired late 70's.
We do have relatives in the states,maybe that's how the handbags ended up over there. Not sure about Canada though

Lodix were based in Leeds UK, The company was run by my grandparents and they produced very well made handbags with matching purses and mirrors.My grandma designed them and some had secret compartments too. They retired late 70's and we never kept the company on much to our familys regret now. Very good to hear that people still have them.

Thank-you so much for your information Jem! I am thrilled to learn just a little bit more about my handbag's history. I suspect that the handbag was likely purchased in the UK but brought over here by the person who ultimately donated it to our Cathedral's Nearly New Shoppe. There are many British born citizens and residents of Canada including my own Mother(born in Peterborough) and paternal Grandfather(from Eccles).

Promote your Page too

Jenifir
Ottawa, Ontario, Canada
I am a mother of four, now at home full time. When I am not taking care of my domestic tasks, you can find me in my studio creating practical and beautiful uses for items with history. I am also known to scour thrift stores for items to repurpose and give new life.